The XF5F Skyrocket was experimental, it competed against several other planes in 1941and beat them handily in many performance aspects, but the US Navy ultimately decided it didn’t want a twin-engine fighter and decided to build the Wildcat instead. Grumman continued development and later produced the much more powerful F7F Tigercat after experimenting with the Skyrocket.

The kit includes the foam parts needed to build this model, along with a fully detailed construction manual and some accessories such as carbon fiber and the pull-pull control system.  The model is not assembled, so the customer needs to supply glue, paint, and other hobby tools, servos, motors, and electronics in order to put it together. This model is designed for two 1300kv/1oz size brushless motors, 3-bladed 9×7 propellers (not included but available separately). and a 3-cell 1350-1500mah battery.

This model is somewhat overpowered for its size (like the real one) and can do some interesting things – like go straight up completely unlimited, then dive straight down with the power off (the big props act like brakes) – and it flies extremely well. Here’s a video showing it going through various maneuvers outside!

Here’s another video of it flying indoors at the KIEF in 2008. I added a very inexpensive retract system as an experiment but I didn’t install a steerable tailwheel!

We have custom-made clear plastic formed cowls (made from coke bottles) available for this model, for $5.00 extra per set.  These need to painted on the inside using compatible paint (the type used for RC cars or helicopters) 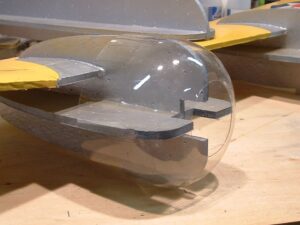 The Rabid Models Skyrocket was designed to be belly-landed. Landing gear is optional, that’s up to the modeler to build (you may use home-made bent wire and foam wheels or inexpensive retractable landing gear as well).