Many people have never seen or heard about this airplane – the “Eagle Owl” was an advanced German nightfighter with devastating firepower.  Armed with auto-cannons (four 30mm in the belly and two 20mm in the wing), the A7 variant was also equipped with two additional 30mm cannon firing upwards.  It had a maximum speed of 420 mph! The Uhu was equipped with an advanced radar targeting system and was the first combat airplane with ejection seats and the first German warbird with a tricycle-style landing gear. Production was limited with only around 300 built, mainly due to the Allies’ bombing campaign which caused a lack of engines.  There is one immaculate example in existence – which is on display at the Udvar-Hazy Aviation museum in Washington DC. It looks like something from the future – CLICK HERE to see.

The kit includes the foam parts needed to build this model, along with a fully detailed construction manual and a full set of detailed printable paper decals (including the cockpits) and accessories such as carbon fiber reinforcement and the Rabid Models pull-pull control system.  The model is not assembled or painted, so the customer needs to supply glue, paint, and other hobby tools, servos, motors, and electronics in order to put it together. This model is designed for two 1300kv/1oz size brushless motors and 3-bladed 9×7 propellers (not included but available separately). It uses a single 3-cell 1350-1500mah LiPo battery.

Here’s the model at the NEAT fair several years ago, this was in windy conditions and isn’t the greatest quality.

And here is another video, flying INDOORS at the 2008 KIEF.  This was a very small flying space and I had to fly slowly, but you can see how nice it looks in the air. This model has a long fuselage and flies extremely smoothly.

The model uses plastic cowls that are made from plain 1-liter soda-pop bottles (which can be found at Wall-Mart and other store) and Spinners, which are not included with this kit  – however Rabid Models offers custom-designed 3D-printed spinners which are available separately, CLICK HERE TO SEE.

The UHU model is available in two sizes, shown here on display at the 2016 Flite Fest event:

The photo below shows the prototype model in flight – amazing what some “shading” with an airbrush can do! 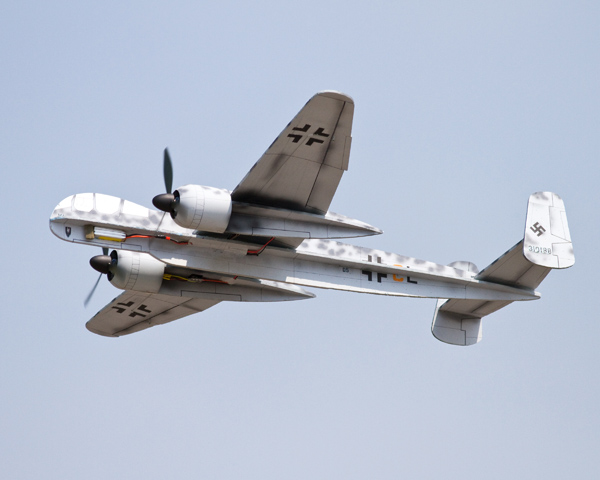 Here is a preview of the cockpit that is included in the printable paper decal package.